For Lindsay and Michael Fineman, being involved with the Federation has always been a part of life. Growing up, Lindsay’s mother Janet served on the Women’s Auxiliary and B’nai Jehudah boards while her father Steve was the Executive Vice President of the Jewish Heritage Foundation and the Treasurer of both the Menorah Medical Center Board of Directors and Village Shalom.

“I feel very fortunate that as a young kid, growing up in Kansas City, I often tagged along when my parents attended board meetings,” Lindsay said. “I watched them plan events, reconcile organizations’ checkbooks, fundraise, and give back to the community, all while teaching their kids that getting involved is both a mitzvah and fun!” 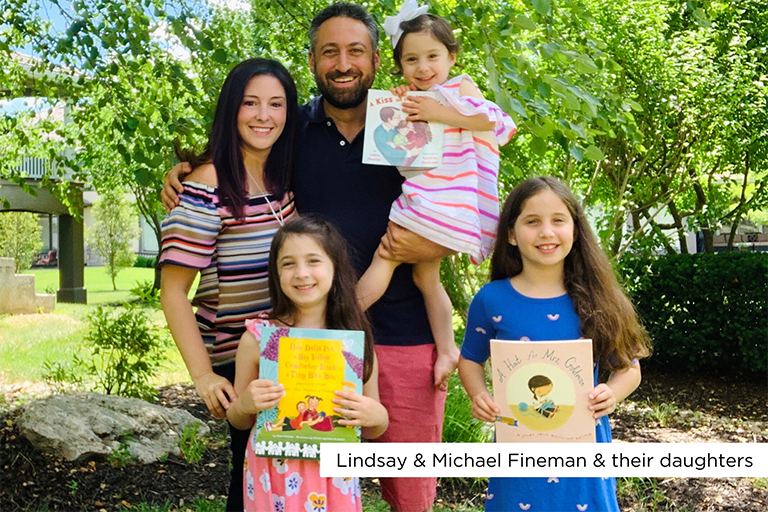 Michael grew up attending community events and fundraisers for the Jewish Federation of Omaha with his family, especially during the more than a decade that his father was the Executive Director of Jewish Family Services.

“I distinctly remember spending many late nights at the Omaha airport, waiting to meet Jewish families that were immigrating from Russia to the U.S. as part of a program sponsored by the Federation. As a family, we’d spend the afternoons readying their apartments and doing some initial grocery shopping, in anticipation of their arrival. That program, amongst many others, has had a lasting impact on me and my relationship with the Jewish Federation and broader Jewish community,” Michael said.

Lindsay describes the way that she and Michael met as “a Jewish parent’s dream;” at Rosh Hashanah services in Chicago but didn’t get to know each other until they sat together on the Jewish United Fund’s Young Leadership Division (YLD).

“About four years ago, our family made the move from Chicago to Kansas City – to be fair, Lindsay did warn me on our second date, that we could only continue dating if I’d promise to someday move back to her favorite city,” Michael said.

The move was bittersweet for the Finemans, who were sad to leave so many friends and family in Chicago.

“Both Michael and I felt strongly that, to make the transition as seamless as possible, we’d want to make sure our kids met new buddies and that we reconnected with lots of my old Kansas City friends,” Lindsay said.

They discovered that the best way to reconnect as well as meet new people has been to participate in Federation boards and events together.

“The Federation here immediately reached out to ‘welcome us home,’ and took an interest in making sure we felt like we had a place in our KC community,” Michael said