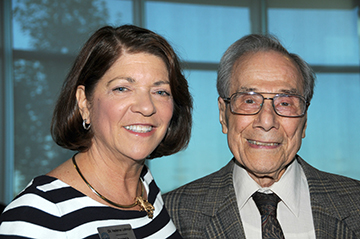 As Helene Lotman was settling into her role as head of the Jewish Federation of Greater Kansas City, he was the one who came to her office on Day One with an orchid and who showed up on her first shabbat in town with housewarming gifts of challah, kosher salt and candles.

Always dapper, known to wear an ascot and an English driver’s hat, he was also the man who – in his early 90s at the time – drove Lotman all the way downtown to meet Henry Bloch.

A man who was always gracious with his time, he was also an outspoken Zionist and dogged in pursuit of his goals.

A native of Detroit, he served as a Navy sonar man in the Pacific Theater during World War II. Following his discharge from the Navy, he earned an undergraduate degree in psychology from Wayne State University and a master’s degree in social work from the University of Pennsylvania.

After various roles in Jewish communal services, Koenigsberg eventually made his way to Kansas City after spending six years as assistant director of the Jewish Federation of Milwaukee.

Lotman became president and CEO of The Federation in 2016, coming on after the retirement of Todd Stettner.

“He just was a wonderful person,” Lotman said of Koenigsberg. “He was a friend, he was a mentor, he was a trusted adviser. He was very special, and very integrated in the community – came to every event – was very supportive, read everything, commented on everything. He was just engaged.”

Lotman came to Kansas City from an executive position with the Jewish Federation of Palm Beach County, in Florida, and Stettner came to town from his role as chief operating officer of the East Bay Federation in the San Francisco area.

Both of them said Koenigsberg was an invaluable resource as they transitioned into their new positions in a new community, and his assistance continued even after those early days.

“Sol never said, ‘No I can’t talk, don’t bother me,’” Stettner said. “He was always there if I wanted to call and talk to him about something.” Added Lotman, “He was invested in other people’s success. It was not about him. That is a unique quality in a person.”