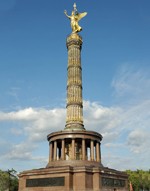 When I signed up for the Germany Close Up trip to Berlin, sponsored by Jewish Federation in cooperation with TribeKC, I knew it would be an educational trip. After all, the entire point was to learn about the Holocaust and what Jewish life is like in modern Germany. But I had no idea as to the breadth and depth of discussion, debate, questioning and introspection our trip would involve. It was an intense and immersive experience, in the best way possible.

Currently, more than a month after returning from Berlin, I am still processing all that I learned from 10 days in Germany. Although it feels like I have more questions than answers at times, I’d like to share a few of the things that resonated with me the most:

Finding your place I realized that sometimes you have to travel halfway across the world to find your place in it. Having worked at Jewish Federation for the last year and a half, I already felt connected to the Jewish community here in Kansas City, but I was surprised at how much that connection grew and deepened while I was in Germany. I returned feeling even happier and prouder to be a part of this community.

There’s always a connection After attending Shabbat services and dinner at a synagogue in Berlin, I learned that even if you don't speak the same language, you can still worship together, share a meal together, and be a part of the same universal community.

Perspective changes everything As we were touring the former Sachsenhausen concentration camp, our guide pointed out a picture of thousands of prisoners lined up for roll call on a cold winter morning. “And now ask yourself, who’s taking the picture,” she said. She pointed out that the prisoners were dressed in heavy coats and hats that were merely props for the photo. This wasn’t just a historical image, but Nazi propaganda. Suddenly, the picture took on an entirely new meaning. Who’s taking the picture, and how their viewpoint influences our viewpoint, was a theme we’d see throughout our trip.​

Learning can be painful It was extremely eye-opening to visit Sachsenhausen and the Memorial to the Murdered Jews of Europe, but those lessons came with tears and were emotionally overwhelming at times. As Andi Milens, Federation's Senior Director of Community Engagement, said one day after several group members became upset during a tour at the Jewish Museum of Berlin, “This isn’t supposed to be not hard.” When the learning challenges you, that’s when you’re growing.

Make your voices heard Perhaps the most important lesson came from one of the Germany Close Up guest speakers, after we as a group asked, "How can we keep this from ever happening again?" The answer: Make your voices heard. Speak out against hate and violence. Don't be silent when you see anti-Semitism, racism, homophobia, or any other form of intolerance.

These are just a few of the many lessons I came away with. Lessons that have changed the way I look at and think about the world and myself. And it’s my hope that in sharing these lessons, I’m also teaching others.