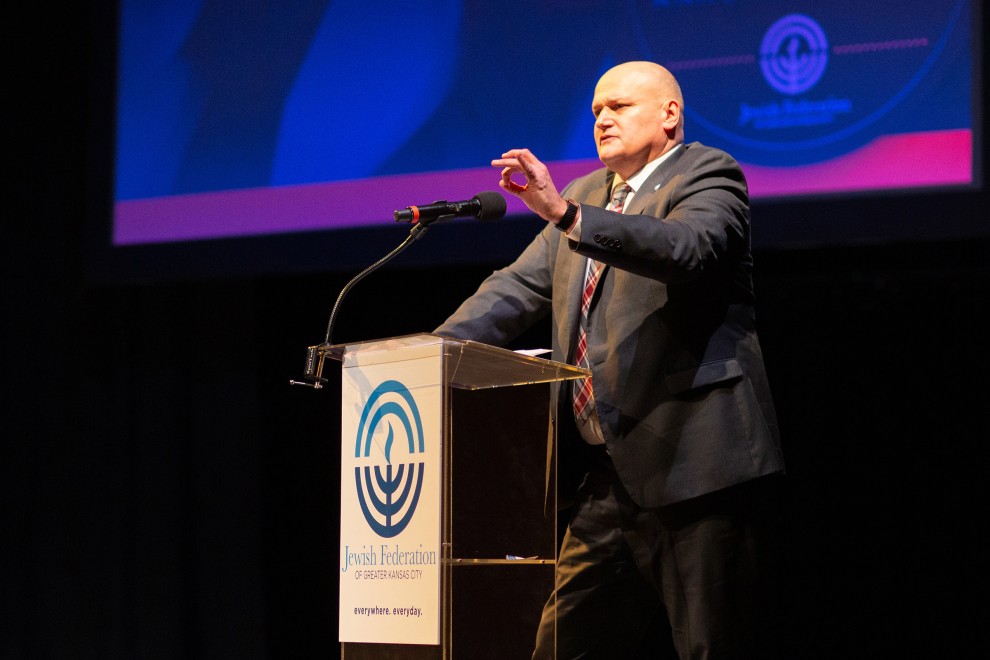 After the tragedy in the Kansas City Jewish community in April 2014 when three people were murdered on Jewish sites by a convicted neo-Nazi, the community learned the catch phrase “see something, say something.”

One of the first ways to be prepared, he said in an interview with The Kansas City Jewish Chronicle, is to take every threat seriously. When he first tackled the security job in the Pittsburgh Jewish community, he visited with synagogue and agency executives. One of his questions: Do you ever get hate mail? In many cases the answer was yes. But he found that instead of reporting it to authorities, many executives simply discarded the threats. Those days are gone, according to Orsini.

“We don’t ignore any signs of hate. We report all signs of hate,” said Orsini, a former Marine who spent three years in Pittsburgh and has 28 years of experience with the FBI.

He admitted there is a difference between hate speech and a hate crime. If it is hate speech, law enforcement often can’t do anything about it.

“But it’s our community’s responsibility and it’s everybody’s responsibility not to ignore it and to report it,” he said. “Hate crimes are a jigsaw puzzle. We need to make sure we have every bit of intelligence that we can gather on these hate groups so we can give law enforcement a mechanism to start looking at this stuff. Even though it might be protected first amendment speech, there are things our community can do.”

What can a community do? For instance, Orsini said if you see something suspicious or out of the ordinary when you are out and about, go to security, call police and report the suspicious activity. Orsini also gave an example of seeing someone putting up a hate filled or anti-Semitic flyer. He said if you are in a safe place, document it.

“If you can get a picture of the (person), if you can write down a license plate number, then provide that to law enforcement or provide that to your community security director. That’s why we’re here,” Orsini said.

Once synagogues and other Jewish sites have been assessed regarding their security vulnerabilities and emergency operation plans have been put in place, Orsini is a strong believer in providing training sessions. He said there’s a laundry list of training session topics including active shooter, stop the bleed training, situational awareness and learning how to recognize behavioral indicators.

“Once we do that classroom training, then we do drills,” he said. “We practice what we teach because we want to get that muscle memory into everybody’s brain on what to do in case we have a threat. We want to practice those protocols and that really drives the point home.”

His ideas regarding training were validated following the tragedy at Tree of Life in Pittsburgh. The three communities that inhabited that building participated in active shooter training just six weeks before the attack.

“Because of training, we minimized loss of life at Tree of Life,” he stated. “Fortunately they got out. Fortunately we had a Conservative rabbi change his method on how he did things, (he used a cell phone) and he’s alive.”

Orsini tells people he never worries about an attack happening on the High Holidays, “because we have law enforcement there.”

“There are physical signs of security,” he said. “You should all feel safe, but you need to feel safe on Friday night when we don’t have police there, on a Saturday morning. (I said) those words on Sept. 5 (2018) and they still haunt me because it’s exactly what happened to us.”

In Pittsburgh he noticed a change in the community’s idea about security after the Tree of Life attack.

While Orsini often gets questions about the wisdom of having guns in shul, he prefers to focus on another popular question: Should I run or should I hide? The answer, he said, is it depends.

“The worst thing you can do is to stay put in an open area. Movement is our friend, movement is key,” he said. “If you are hiding, you’re moving. You’re not just hiding … if you are barricaded you’re going to prepare. What are you preparing to do? You are preparing to evacuate or counter.”

“What we really try to do in our community is teach them not to freeze. That is really the key in any active shooter training,” Orsini explained. “Whether it’s run, hide, fight or avoid, deny, defend … whatever it is it’s all about not freezing, not being paralyzed with fear. Having that muscle memory to commit to action and react. That’s what we want our community to do."

While he was here, Orsini said he checked out the security situation at the Jewish Community Campus.

“I think you’re doing everything you need to do,” Orsini said. “The Jewish community needs to continue an aggressive training program, which I believe is one of the most important things that guys like your Jewish Community Security Director Chuck Green and I can do is to educate our community.”

As he transitions to his new position this month with SCN, the security arm of the Jewish Federations of North America, Orsini will be providing assessments and training to Jewish communities across the country. His focus: What we can do to protect ourselves.

“We can’t control somebody wanting to come in and hurt us. The only thing we can control is how prepared we are to deal with that threat. We need to prepare. We need to be aware.”

As he told those that attended the Federation’s meeting, he doesn’t want anybody afraid to go to shul. Here again he suggested, “Be proud of who you are. Be trained, be empowered, and be resilient.”

Orsini knows people are afraid to attend training classes, but he believes that fear is unfounded.

“There has not been one person out of the 16,000 that we trained in Pittsburgh that came away after training being scared,” he said. “In fact it’s the absolute opposite. They felt empowered because awareness does that to you. Again, that’s the only thing we can do to protect ourselves.”

Reprinted with permission from The Kansas City Jewish Chronicle