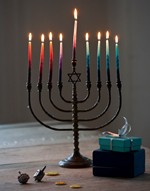 As Jews around the world lit the Hanukkah candles last night, we learned of yet another horrific antisemitic attack. A man armed with a machete entered a rabbi's home in Monsey, New York during a Hanukkah celebration, and stabbed five people. The victims were taken to the hospital for injuries, with at least one in critical condition.

This assault is the latest in a disturbing string of violent attacks against members of New York’s Jewish community during Hanukkah, only weeks since the shooting at a Kosher deli in New Jersey. And, it stands as the fourth violent attack on a Jewish gathering in the last fourteen months, targeting Jews as they were simply practicing their religion.

As we consider these sobering facts, let’s also remember that antisemitism is not a “Jewish problem.” It is a societal problem, just as an attack on Jews praying is not just an attack on Jews alone, but an assault on our American right to religious freedom. This is why we are so grateful for leaders across the political spectrum and throughout our civil society who have spoken out strongly against antisemitism and all forms of hatred.

We have much work to do in this arena. However, it is important at this moment for the Jewish community to be aware of the critical work that is already underway to increase the security of our community.

The Federation’s safety and security efforts – at a national level – are led by the Secure Community Network (SCN), which has dramatically increased capacity to support all local Federation Security Directors, as well as serve the vast majority of Federations and communities that do not have such a resource but are increasingly committed and working to address security.

Locally, the Jewish Federation leads the initiative for Jewish community safety and security for Kansas City.  Our strategy is one of security awareness, information sharing, training, close communication with local law enforcement, and partnerships with national organizations charged with keeping our Jewish community and other institutions safe.

Let us remember the ancient teaching that Hanukkah offers: even the smallest light can triumph over darkness if we have the courage to kindle it. All over the world, Jews will proudly light Hanukkah candles tonight, just as the Jewish community that came under attack last night did. Collectively, we will use our Hanukkah light to stomp out this darkness our brothers and sisters are facing.